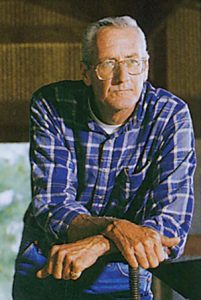 Danny Ward was the owner and operator of Danny Ward Horseshoeing School in Martinsville, VA and a third generation farrier.  He was known for his superb farrier abilities, humility, and commitment to education.  He was a member of the Anvil 21 Club and an early inductee of the International Horseshoeing Hall of Fame.  Danny lectured at countless farrier clinics and conferences.  He has been honored with the American Farrier’s Association’s Outstanding Clinician Award and the Outstanding Education Award.  He demonstrated his commitment and dedication to education by writing nearly 100 articles on farriery for trade publications.

He was a 4-time member, and 4 year coach of the North American Farrier’s Team, judged several forging competitions including Stoneleigh in England, the AFA Convention, the Heavy Horse Competition in Scotland, and the World Championships at the Calgary Stampede twice.

Throughout more than 50 years of shoeing, he hosted the Eastern Farrier Conference for 4 decades.  Danny’s impact on the industry is immeasurable. He set an example for everyone to attempt to emulate.  There wasn’t a person he wouldn’t help much less a fellow farrier with a question.  Most farriers remember him for his knowledge, his skill, and his willingness to teach.  He was a role model for all who had the pleasure to meet him.

Danny Ward was a great mentor and always willing to give of his time.  When Danny passed away in 2018, AFA member Troy Price, CJF contacted Danny’s daughter with the idea of hosting an annual clinic to raise funds for a scholarship to assist a student with tuition for farrier school.

Danny used to say “Don’t forget the little guys”.  As a mentor Danny lived by his own advice and what better way to honor him than to have a scholarship in his name to help the little guys.  Anyone starting out in this trade has an enormous amount to learn.  Being able to help financially with a student’s tuition in Danny’s name is truly an honor.

If a scholarship recipient decided at the last minute not to attend farrier school, the scholarship monies should be handled according to the school’s refund policy.  If a refund is granted, the monies would be distributed back into the scholarship fund to be used for another applicant.

Applications will be due by October 1st each year and will be reviewed by the chosen committee.  The recipient(s) would then be notified by mail/email around January 1st if they are chosen.

Monies raised at a fundraiser event or donated will be deposited in the Indiana Farrier’s Association scholarship fund.  Checks written for donating to the IFA scholarship fund will be made payable to the IFA with a memo stating “Danny Ward Memorial Scholarship fund”.  The IFA will issue a check to the farrier school listed for the chosen recipient(s) before the recipient’s start date for the upcoming school year.